POMPEII AND THE MYSTERIES OF ETERNAL BEAUTY 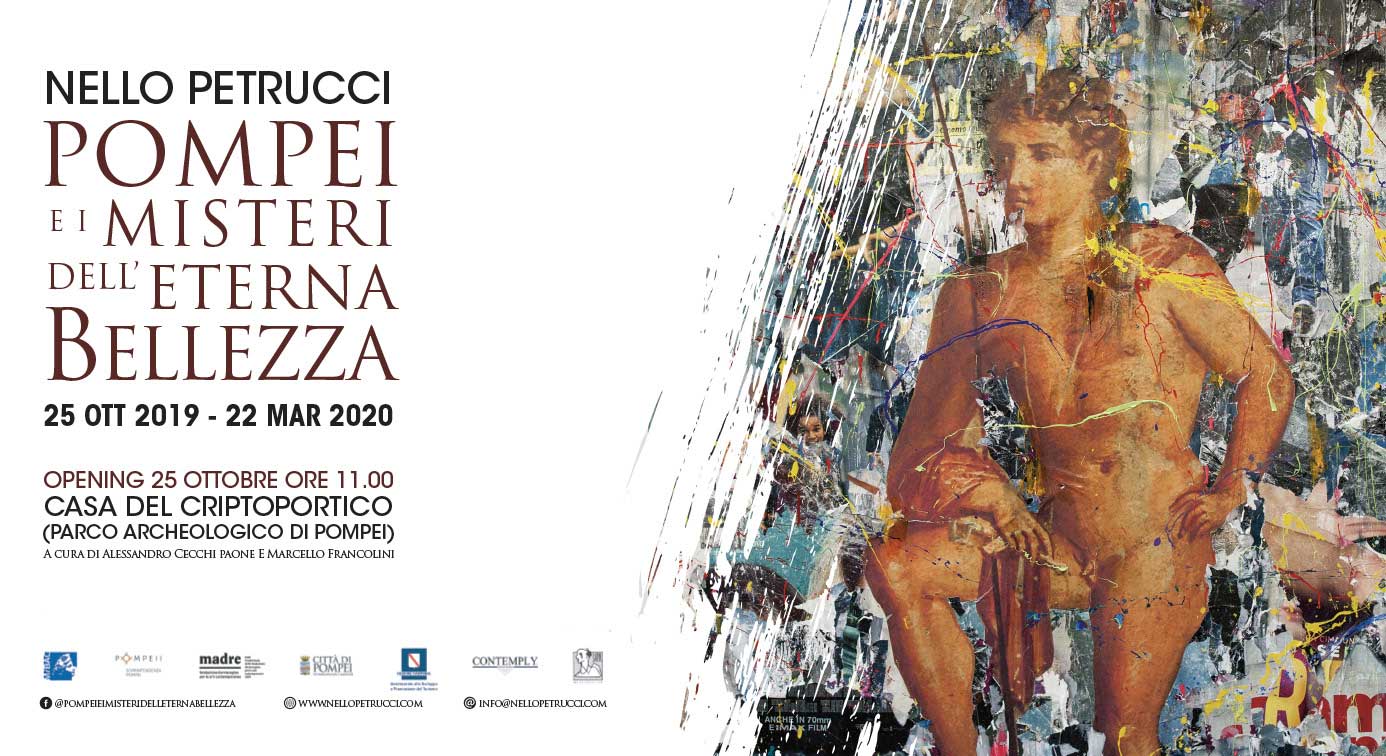 Pompeii and the mysteries of eternal beauty

Archaeological Park - House of the Cryptoporticus and Antiquarium

Friday 25 October 2019 in the Archaeological Park of Pompeii in the Casa del Criptoportico, the exhibition Pompeii and the mysteries of the eternal beauty of the artist Nello Petrucci will open, a project that is based on a collection of works entirely dedicated to Pompeian painting and which for the first time brings an Italian artist into the ancient domus.

The exhibition stems from a thousand-year-old question that inspired Nello Petrucci's work: who were the painters, the artists of those magnificent frescoes that represent the tangible sign of life that flowed in the prosperous colony of the Roman Empire? What were their names? Where did they come from? And above all, why is there no trace of their work? Ancient masters who have created absolute works of art that still leave us stunned by their technique, their remarkable artistic ability, that rigorous perfection, a source of inspiration for many contemporary artists. Their anonymity, that being for history "the unknown soldiers of Pompeian painting", for the absence of their signatures, of their names on those ancient masterpieces, pushed Nello Petrucci to give him a face to pay homage to that surviving beauty up to us.

Thus a slow, progressive maturation was born which allowed the artist to combine the forgetting of their identities with a work that could become a story to be told to the generations of the third millennium. Petrucci's technique, his unmistakable style, is to eradicate those frescoes from their fixed immobility, transporting them in the speed and whirlwind of our digital age. The art of breaking, tearing, transferring an ancient fresco by inserting it into the contemporary world, creates a fusion, almost a painting in the painting, and the glue that holds the work of art together, is a tribute, a recovery of the memory of those anonymous artists, and above all it represents the love with which Petrucci wanted to put their shattered stories back together, like the pieces of a vase.

The nucleus of works presented by Petrucci takes its cue from Josif Brodskij's words: “It is as if space, aware here more than anywhere, of its inferiority with respect to time responds to it with the only property that time does not possess: beauty". Nello Petrucci shows himself aware of the transience of existence and of the eternal present, as also the curator Alessandro Cecchi Paone explains: “So what are the crowded signs of Nello Petrucci about the matrons, the priapi, the dances and the dances of the lost and found city? Certainly more than transience as in Rotella, lasting instead. As if the graphic and polychrome noise of centuries and millennia had not been able to scratch the classical fixity entrusted to the expertise of unknown forgotten artists ".

The works of this cycle, as evidenced by Marcello Francolini, art critic who has been following the artist's work for some time, belong as in a temporal succession to a single great narration on the value of the classic, evoked through the imagination Pompeian.

The exhibition is made up of twelve canvases of different sizes and four sculptures, one of which entitled "Atavistic heart", is the symbol of the millennial past represented by Pompeii. He wants to depict the map of the city which, through the eyes of Nello Petrucci - originally from Pompeii - takes the shape of a heart, an ancient heart precisely: its streets are the pulsing veins and the famous via dell'Abbondanza is its artery main that unites the ancient city and the modern one and metaphorically past, present and future.

The exhibition will be accompanied by the publication of a large volume published by Silvana Editoriale. In its first part called "diachronic" and "synchronic" Pompeian art will contain the essay by Alessandro Cecchi Paone, which will deal with the suggestions related to the place and its relationship with the ever-alive sensitivity of art and beauty; to follow the critical reflection of Marcello Francolini, on the work of Nello Petrucci and on the necessary value of the Genius Loci which manages to restore the pre-eminence of its roots to build different vision perspectives; then there will be the essay by Francesca Barbi Marinetti who will deal with the relationship between the street art ante litteram of Pompeii and the current one trying to outline what Petrucci keeps as memory and what he re-elaborates as current. Finally, the section ends with Maria Letizia Paiato's essay on the urgency and need to weld our impressions on history and on what we call Glocal culture.

The second part, called The inexhaustible communicability of Pompeii, will deal concretely with the architectural structures and masonry works that represented the pool of ideas from which the artist drew to re-found a new imagery of the classic-contemporary with an essay by Prof. Umberto Pappalardo, and Prof. Antonio De Simone, who will highlight how the house of the Cryptoporticus (seat of the exhibition) was already a picture gallery during the Empire of Rome and how art conveyed in that period through the examination of the wall cycle of Villa Dei Misteri.

The third part, called The artist's own thought, includes the interview by Carlo Manfredi with the artist Nello Petrucci, a long discussion on his artistic career and on the objectives of the latter project.

Nello Petrucci (Castellammare di Stabia, 1981) lives in Pompeii and is an Italian artist and filmmaker, graduated from the Academy of Fine Arts in Naples. An omnivorous curiosity and a multifaceted talent have generated the unmistakable style of his "Decollage"; so much so that critics have coined a new term, "Pop Kinetics", to define his art. One of his works, The essence of lightness is permanently exhibited on the 45th floor of the 3rd World Trade Center in New York; the only Italian invited to exhibit, together with the best street artists in the world. Also in New York, he exhibited twice at the Agorà Gallery, and then in Rome at the American Embassy in Rome with Over the Sky, a series of canvases dedicated to 11 September. On the cinematographic side, in addition to playing various roles as an actor, including a small part in Martin Scorsese's Gangs of New York, he shot a short film Lost Love (2019) on the theme of racism and signs the direction of the video clip Remove the frame on the theme of homosexuality inside the Archaeological Park of Pompeii. In 2019 he founded the film production company Satyr M.B. production.