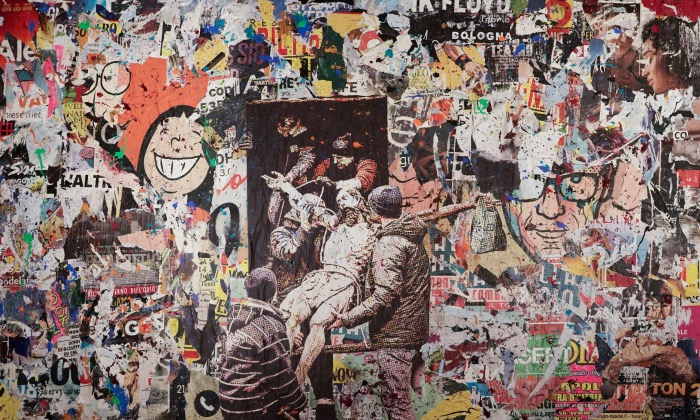 Palazzo Contarini del Bovolo, recently restored and reopened to the public, is pleased to present the personal exhibition PROFILES by the Pompeian artist NELLO PETRUCCI, curated by Chiara Canali and with a critical presentation by Luca Beatrice. The exhibition, promoted by Contemply Art & Investiment, is hosted in the Sala del Tintoretto on the second floor, with access from Scala Contarini del Bovolo in Venice, and will be visible from June 16 to August 26 2022, with a preview on June 16. at 5pm. A personality already recognized in the Italian and international art scene, Nello Petrucci is an Italian author and film maker who works using different expressive techniques (from painting to collage, from halftone photographic printing to screen printing) and intervening in different fields media and linguistics (from cinema to contemporary art, from street art to public art). In the collage and décollage works, Nello Petrucci starts from an action of finding, collecting, reproducing fragments of broken and estranged reality (the pieces of posters and cinematographic posters) which he brings to the attention of the viewer's conscience, associated with the portraits in the first place. plan of characters from the sphere of history, music or cinema, so that consciousness can freely dispose of them. Both as regards the profiles recovered from classicism and for the subjects coming from the cinema, Petrucci has deliberately identified and chosen the halftone technique precisely because of its characteristic of being "low definition", opaque, discontinuous, because it provides little visual information to the observer, it requires a greater involvement, a greater participation to complete what is only suggested by the mosaic pattern of dots. This halftone procedure is taken to extremes and becomes a subject across the board in the Street Art interventions conceived and created by Petrucci for the urban context and positioned in an impromptu form in various Italian cities and around the world. Considered as a "low definition" image, in which the points of the photographic screen become visible and exhibit the gaps and gaps that separate them, the halftone photographic image lends itself to being taken as a model for an alternative vision of history and reality : a vision aims to break down the present into fragments and reassemble it in new configurations according to the operative principle of cinematographic “montage”. Hence the training and attitude of Nello Petrucci's director also returns in the poetics of the street artist. As Chiara Canali states, "Together with the halftone technique, the artist uses a sort of scenic montage that allows him to migrate images from one support to another, from one context to another and from one historical time to another. , but it also highlights the shifts in meaning, distortions and anachronies produced by these migrations. This allows him to intervene in an acute and vibrant way on some burning issues of our current affairs, to awaken the perceptive, cognitive and social participation of the observer on certain issues such as the right to vote, the judicial system, health surveillance, illegal activity. , financial speculation, the contradictions of war ”. The last monumental work, specially designed for the solo show at Palazzo Contarini del Bovolo, is titled Hell and was born in dialogue with the sketch by Jacopo Tintoretto, preserved there, relating to the large canvas of Paradise in the Doge's Palace. In contrast to Robusti's Paradise, which had intended to reconstruct, in a celestial sphere, the hierarchical perfection of the Venetian government, Petrucci reinterprets a dramatic image of Earthly Hell, taken in Ukraine when a statue of Christ was removed from the Armenian Cathedral from Lviv and taken to a bunker to be protected from Russian bombing. Once again, the inconsistencies and antinomies of the war are found in the burden hanging on the hands of Christ, which bears the inscription "Leo", an allusion to an indiscriminate production of weapons also found in Italian industry. "An adventure, the one with Petrucci, which began several years ago, which has led us to grow and improve constantly. Starting from a base of hard work and solid values, we were able to achieve great goals, first of all The essence of lightness, the permanent mural at 3 World Trade Center in New York, 15x3.5 m, created as part of the Masterpiece project in the sky promoted by tycoon Larry Silverstein. This was just the springboard for countless other successes, including the Over the Sky exhibition at the American embassy in Rome and Pompeii and the mysteries of eternal beauty, personal inside the Casa del Criptoportico, Pompeii Archaeological Park and again the various site-specific installations such as the spectacular sculpture entitled Trame which has become part of the prestigious permanent collection of Thetis Spa and again Margine, positioned in the scenario of Torre Fossa lo Papa ”, declares Giovanni Boccia, CEO of Contemply Art & Investment. The exhibition will be accompanied by a catalog of 144 pages and 100 color images, published by Silvana Editoriale, with texts by Luca Beatrice, Giovanni Boccia, Chiara Canali, Luigi Giordano.

Nello Petrucci (1981-) is an Italian artist and film-maker, lives and works between Pompeii and New York.

He studied cinematography in Rome at the N.U.C.T; graduated from the Academy of Fine Arts in Naples in Scenography. He has worked with directors such as: Martin Scorsese, Ari Taub, Manetti Bros, Antonio Capuano. Petrucci's works are strongly influenced by cinema, in particular by film posters that are revisited by the artist as legacies of historical memory in which past and present coexist.

He is the first Italian artist to exhibit at the Word Trade Center in New York with the permanent work "The essence of Lightness" (2018) together with world famous street artists such as Ron English, WhlsBe, Lauren YS, Layercake etc ... Sensitive to environmental and social issues to which he has dedicated works such as: “Plastic River” a public installation depicting a whale full of waste. He has exhibited at Palazzo Gravina in Naples, at the Central State Archives of Rome, at the Archaeological Park of Pompeii, at the American Embassy in Rome in the monumental complex of San Domenico Maggiore Naples and in several galleries in Italy and New York. One of his works is exhibited at the Museo del Enslallido social in Santiago de Chile. He has created several open air sculptures including: “Margine”, in Torre Fossa Lo Papa, Punta Campanella. Trame ", in the Venice Arsenal, joining the prestigious collection of the" Spazio Tethis "together with Michelangelo Pitoletto, Jean Fabre, Beverly Pepper etc. He has made various independent film projects, from short films to video art, receiving numerous awards. With his latest work: "The last whiskey with the mad hatter" (2020) he gets the nomination for the "Golden Globe" as best short film. More than the aesthetic component of the work, Petrucci looks at the ethical value that it communicates, for an art that is the expression of an inner revolution and social commitment, using the road as a vehicle. His name is often associated with street art. Among the street art works scattered around the world we remember: "Sweet home" (2020), considered among the nine most significant works in the world during the period of the pandemic. "La mano de Dios", "Red Zone", "Masks" "We remain Human", "Imago" in Castellammare di Stabia, "Sad Generation" Venice, Distant Destination "in Barcelona. "Attese" his latest work in Miami dedicated to Chico Forti. His technique is based on printing (halftone on paper) Petrucci's works are scenographic and impactful in full respect of eco-sustainability and the protection of the locations chosen for his interventions, defined as "the gentle streetartist". He is the artistic director of the Pompei Street festival, and Stabiae Street (international urban art festivals) inviting street art artists from all over the world to Pompeii, from C215 to MCity, Francisco Bosoletti, Ledania , Gianpiero, MrKas etc. His social commitment brings a new interesting challenge: "Social Vision" a project that includes various interventions for the community, and with the community, inserting art as the only denominator ... Art as a form of change and social evolution. "I strongly believe in the power of art, and what it can do by connecting people ..."

INFO FOR THE PRESS