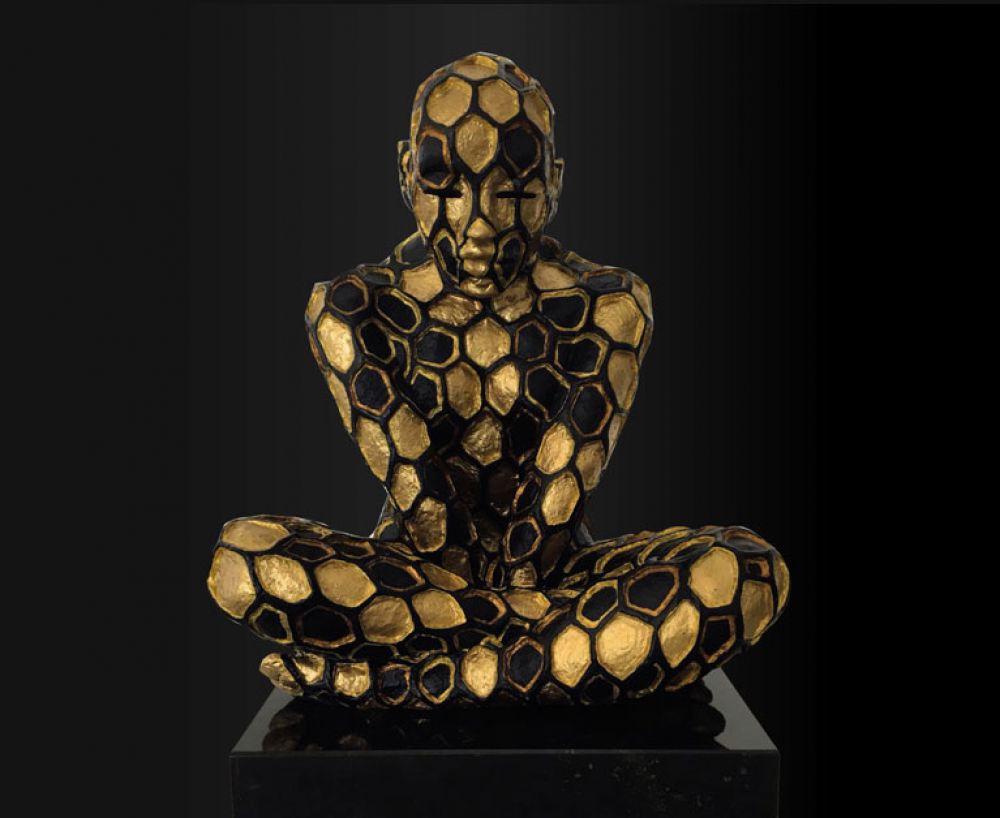 Rabarama, aka Paola Epifani, born in 1969 in Rome, Italy, is an artist who lives and works in Padua. Daughter of art, from an early age she showed a natural talent for sculpture. Rabarama began his training at the Treviso School of Art, then later the Academy of Fine Arts in Venice. She graduated in 1991 with high marks and immediately began to participate in a large number of national and international sculpture competitions, which brought her many praises from the public and critics.

Rabarama creates sculptures and paintings with men, women or hybrid creatures, often also passing through the eccentric. The skin of the subjects created by the artist is always decorated with symbols, letters, hieroglyphics and other figures in a variety of shapes. The "membrane", the "cloak" that seems to envelop these figures constantly changes, always enriching itself with new signs, symbols and metaphors. The alphabet indicates the internal limit present in language and our being singular-plural entities (according to the conception of the philosopher Jean-Luc Nancy): hieroglyphics, puzzles and honeycombs are the visualization of the genome, the infinite combinations and possible varieties inherent in humanity, visualized in the mental labyrinths in which the multifaceted complexity of the ego is materialized. Exhibitions of Rabarama's works are often presented in collaboration with other artists, performers (body painting, dance, acrobatics) and are enriched with video and audio projections. His work is considered suggestive and exciting, it describes all the pains and joys of the human being, from slavery to freedom, genetic code of dreams.

"Rabarama's art is often very aggressive, not only for the viewer, but also for the creator," said George S. Bolge, executive director of the Museum of Art in Boca Raton, Miami, United States of America, regarding the artist's works.

This long journey, studded with successes, led her to be present at the 54th Venice Biennale in 2011 with the monumental work Abbandono, made entirely of Carrara marble.

In addition to this fundamental recognition, his works have been exhibited in the greatest world capitals of the art scene such as, among others, Paris, Florence, Cannes, Miami, Shanghai.

Furthermore, numerous and important are the acquisitions of his works by important public and private institutions such as the Art Museum of the Biennale of Beijing, the Sculpture Space of Shanghai and the Copelouzos Museum of Athens, without forgetting the three monumental works purchased from the Municipality of Reggio Calabria and exhibited at the Falcomatà waterfront.

Since 2014 she is godmother and inspirer of the Skin Art Festival, which is held in Merano, collaborating with Kryolan. Recently, in 2015, Rabarama won the international competition organized by the Municipality of Vallo della Lucania (SA). Following this victory, Leud was created, the largest marble work ever created before by the artist, now exhibited in the characteristic historic center.

In 2016 Rabarama exhibited in both Italian galleries, such as the Italian Fine Art Gallery in Positano and the SimonBart Gallery in Porto Cervo, and abroad, participating in the Vught biennial organized by Van Loon Galleries, the Netherlands. In the same year he participated in the Asolo Art Biennial (TV) in Italy.

Thanks to hers multifaceted talent, Rabarama experiments and realizes, over time, the terracotta works, the classic and well-known painted bronzes, the fascinating unique pieces in marble, glass and rare stones, the inclusions in resin, the monotypes in silicone resin , the precious artist jewels and, of course, also the splendid paintings and serigraphs.