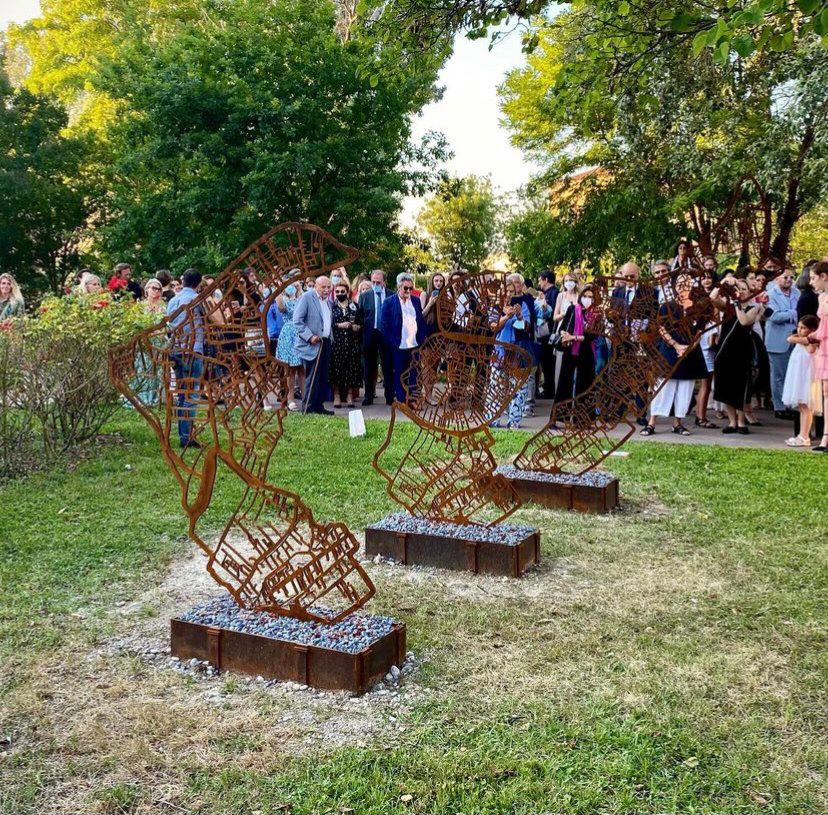 TRAME the new site specific installation by Nello Petrucci will become part of the permanent collection of Spazio Thetis, at the Arsenale in Venice, thanks to the donation by the artist and Contemply Art & Investment. Saturday 26 June at 6.30 pm, the inauguration event.

The new open air installation by Nello Petrucci, created site specific for Spazio Thetis, hub of contemporary art at the Arsenale of Venice, is still top secret, the work will be unveiled and donated to the permanent collection by the artist and Contemply Art & Investment, a company that has supported him in his projects for years, with an inauguration event on June 26 in the presence of personalities from the world of culture and institutions.

Petrucci is an eclectic artist whose production, which ranges freely within the visual arts, manages to surprise us.

He lives and works between Pompeii and New York and it is precisely in these two "places of the heart" that starting from 2017 he created some of his most significant works: in Pompeii, placing the excavations of the archaeological site in dialogue with the planet Mars and New York where he made a name for himself with an exhibition at the Agora 'Gallery entitled “Kairos” which was subsequently also presented at the Art Fire in Shanghai. He also boasts a record, he is the only Italian artist present at the 3 World Trade Center in the project of the tycoon Larry Silverstein, his work "The essence of lightness", megalography located on the 45th floor, has been defined by international newspapers as "Masterpiece in the sky ".

Nello Petrucci's work will join the works in the splendid Spazio Thetis park, bringing his extraordinary reading of reality and in particular of the relationship between man and the environment.

This is a new important step in the journey of the Venetian space, which has its own

driving force in its cultural manager, architect Antonietta Grandesso, and a stimulus, a powerful creative drive for the established but still young artist from Campania who with this initiative renews the long collaboration with Giovanni Boccia's Contemply Art & Investment, cementing a professional relationship , of friendship and shared passions extremely constructive and capable of achieving significant objectives.

Spazio Thetis, which has promoted contemporary art since its foundation, has welcomed with great pleasure TRAME, which represents a tribute to Venice, with which the artist invites the viewer to consider reality from new points of view, in a relationship with the City of water more curious, attentive and less oleographic, becoming almost a symbol of the will to leave again, trusting in a new rebirth.

The first factory in history able to amaze even Dante who describes it in the Divine Comedy, the incredible "Arzanà di Viniziani" has now become a cultural and exhibition site of global importance, mainly due to the presence of La Biennale, but also for the growth over the last 20 years of Spazio Thetis, where temporary exhibitions blend harmoniously with the works of the great artists of the monumental permanent exhibition which includes installations by great artists such as "The man who measures the clouds" by Jean Fabre, "The Third Paradise ”By Michelangelo Pistoletto,“ The Sentinels ”by Beverly Pepper; just to name a few.

And it is right in the center of the Thetis park in line with the Beuys Oak, planted in 2007 by Lucrezia De Domizio Durini and which recalls the 7,000 oaks planted in Kassel by the great master

German, where TRAME will arise. La Quercia, so important in the history of contemporary art, seems to indicate a path to follow with naturalness, commitment and creativity.

Antonio Onorato, established composer and musician, who has played in prestigious festivals and theaters all over the world including the "Blue Note" in New York and has collaborated with Pino Daniele, Franco Cerri, James Senese, Enrico Rava and many others, for the friendship that binds him to the artist will be present at the vernissage with one of his musical performances.