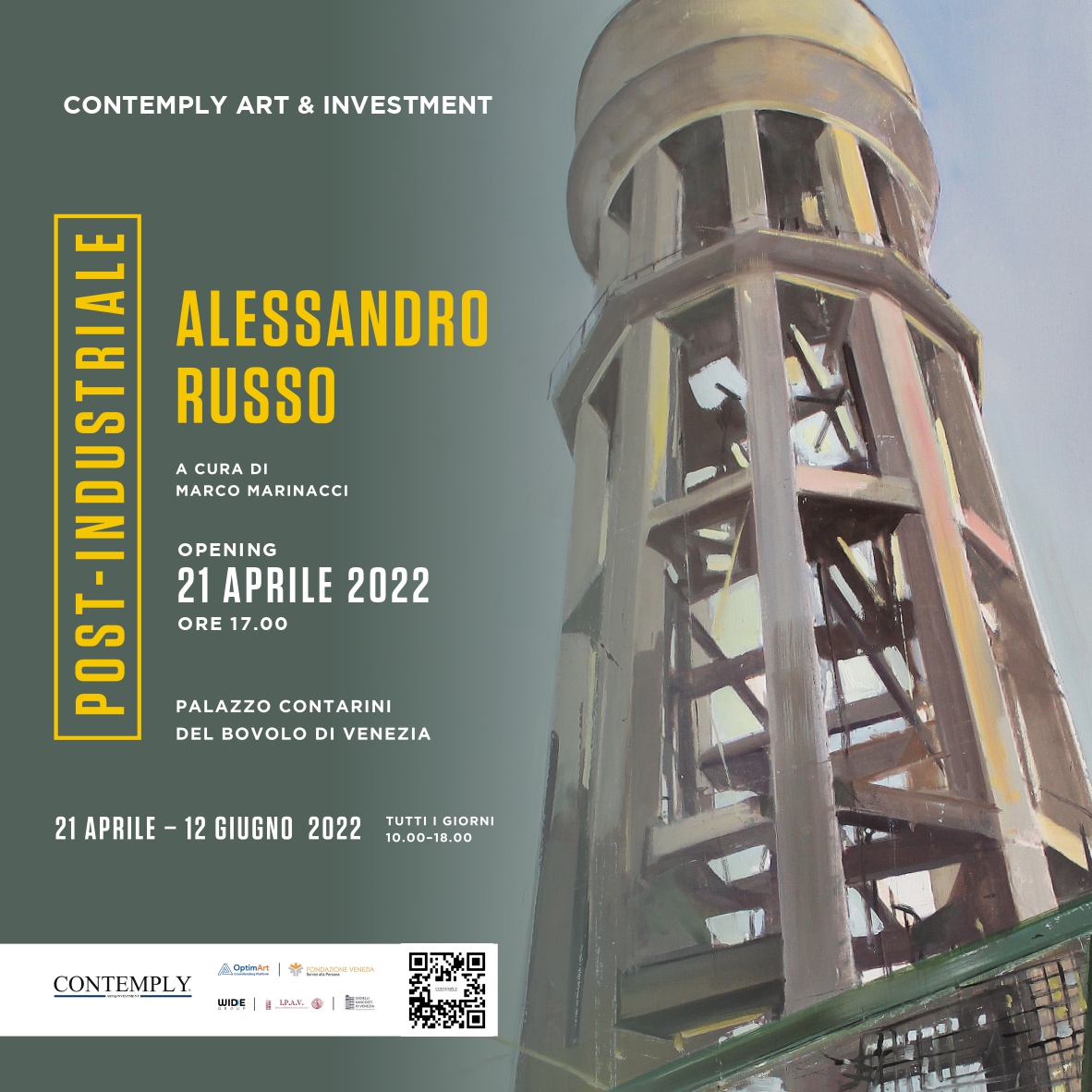 The architecture of a sumptuous Venetian Gothic, which was able to give shape to the Shakespearean tragedy of Othello, in the imagination of a visionary and expressionist Orson Welles hosts, on the occasion of this post-pandemic biennial, another extraordinary allegory: the post-industrial city of Alessandro Russo.

The exhibition opens with the reckless perspective of a water tower, also heir to Eisenstein's photography, like the spiral staircase of Palazzo Contarini del Bovolo along which Welles drags the fluffy figure of Desdemona. But now the names, like that of Giovanni Candi, author of the Renaissance vertigo that five centuries of history have not cleared, seem all absorbed in the millstone of Time, and in the lattice that the Lagoon draws stagnates a silence made of anonymity.

Russo's liquid brushstroke stages the counterpoint of a lost renaissance, the lost opportunity, retreated into its helical staircase. But the painter, as if digging into that kaleidoscopic labyrinth, forces shots in the guise of Rodchenko, and with the prehensile gaze of a Russo chameleon shakes the still, vitrified image of the postmodern city. He looks at her through a veil of liquefied albumin, like Mark Rothko when he claimed to paint the light that you see with your eyes closed.

And he catches an idea by heart, stealing what Klee defined as a "reminiscence". But the portrait he gives of it is neither abstract nor shapeless: Russo captures the skeleton, the exoskeleton that remains of his buildings, streets and offers an X-ray of the "living machine", which interrupted his heartbeat. The place of life, of the pulsating exchange of a community, as Georg Simmel saw it, has been transformed into an inert bier. Its inhabitants? We can expect nothing but larvae closed in cataphract chrysalis that imprison every movement, awakening us in a Kafkaesque reality.

Are we facing a fatal allegory, then, that of the death of the city, which Russo immortalizes? Far from it! It is a memento, and at the same time a hymn to life. The landscape is now teeming with new totems, raised from a barbarian civilization to a divinity whose names still unknown. The few, almost indecipherable, remain to camp on inert hulls, whitened by the saltiness. Ready to set sail and disappear in the lagoon mists.

Russo collects every sign, like a gardener gifted with the magical art of attaching petals scattered in the wind to the corollas, and reconnects it to the vastness of a canvas that feeds on pigments, smelling like nectar, quivering with vital energy like buds in spring. And it seals a new Spring, an allegory of rebirth, which like Venus emerges from the mists of the sea, making us discover that in that landscape the seed of a pantheism is hidden in which every form is cloaked, and the absence of man is a prelude to a new divine presence. A god who will save the world with beauty.

Walking through the streets and fields, you come across a strange helical staircase that sucks/draws/ the curious gaze of the flâneur upwards. It is to the tactile eye of the "botanist of the sidewalk", the wanderer, the professional walker, the peripatetic philosopher, the cop looking for clues, the connoisseur of the folds of the city, that the two large rooms of Palazzo Contarini del Bovolo unfold, projecting onto the wooden frameworks and lace walls the frames of an enormous cinematographic film. The director, Alessandro Russo, however, has chosen to replace the diaphanous epiphanies of the images of light with canvases fraught with pigments. A pigment that struggles to recover the cerulean of the sky, to attempt the alchemical magic, something that only painting is able to do, to transform itself into a volute cloaked in fumigating presences, from which to conquer/reach a cyan of Olympus. A dusty pigment, oblivious to the academic ductus, and free to get dirty with spatulas, billboard brushes, up to the dense lunge of fingers, just to touch things: those things that are made of reality, the city, the landscape.

This is how we realize, once we really open our eyes, that we have entered, as protagonists, in the movie that an unknown production - some call it a liquid society, others post-modern, still others point to biennial glory "isms" ... - has made the decision for us, and apparently has not yet realized that has entrusted it to the most relentless, ferocious and refined of contemporary directors. Like Fritz Lang, "When the city sleeps", Russo warns that it is time to sharpen the gaze, and with lenticular accuracy he captures every detail.

Here then, in the first room, the prow of ships, tall towers, singular buildings and desolate shorelines anchor themselves to a larger but still indecipherable design, like chess pieces in a predetermined game though unpredictable moves. Only castling, remembers Russo, is prohibited! They are the primary alphabet of a poetics that becomes post-language, even before being a cohesive language. An architecture by elements, stigmatized by the more orthodox criticism, idolized by the militant one, theorized by the academic one fed to the media, software, CAD projects; and never metabolized by its inhabitants. So Robert Venturi, and adventurous patrons with him, attempted to feed on a pie-shaped city. But underneath, Russo reminds us, as soon as the candles are melted, the armor is hidden; and the smoke that now spreads in the air smells of sulphur, carbon, and potassium nitrate ...

Thus, in the second room, like Goya's Colossus, the Post-industrial image appears: kaleidoscopic, fractal, replicant. But not dystopian! Alessandro Russo, with the courage of someone who knows how to transform images into reality, shows us the utopia, the chance hidden in the torn and shaken fabric of the lifeless city. And like the “Quinta del sordo”, this room invites you to transform your gaze into a polymorphous sense, capable of reclaiming the elements of the landscape, bringing them back to ensembles, and in this semiosis dipped in color, making them corollaries of "design", and of life.

Because, Russo reminds us, as long as the objects of architecture cannot be removed from the landscape in the same way as canvases on the wall, these landscapes on the walls – to understand the pictorial quality that is hidden there you have to look at them like this: up close, moving away the infinite glazes with pince nez in the manner of Chardin, you discover details of Flanders, the result of the same search for truth pursued throughout his life by Cézanne, extracted directly from objects and captured by an oblique path in Morandi; as we move away we perceive a precise atmosphere gathering around those same objects, also called "aerial perspective" by Leonardo, their living space that makes them part of the world ... and suddenly everything becomes real, while we are swallowed up by the Lebenswelt – they will help us to design a world driven by our senses and by the extraordinary beauty who will direct them.

ALESSANDRO RUSSO, born in Catanzaro in 1953, in more than forty years of painting has affirmed his original artistic personality in the European figurative scene. Since the 1970s, with the first reviews in private galleries, he has shown the personal invention of a visionary, autonomous and highly refined universe. Initially ironic and caricatured characters appear in his works to give life to a timeless world, full of fantastic presences and wrapped in a poem full of existential and social meanings. His personal style masterfully reworks the ways and techniques of 18th and 20th century European painting. This brings his work to the attention of critics. In the 80s, while following exhibitions throughout Italy, Russo chooses to work in his hometown and to engage in teaching at the Academy of Fine Arts in Catanzaro, where he becomes Professor of Decoration. In the 90s, the roots in their own land are evidenced by the works inside important public spaces, such as the Pinacoteca di Taverna; Palazzo De Nobili, seat of the Municipality of Catanzaro; the Public Palace of Corato; the Provincial Palace of the Guardia di Finanza in Vibo Valentia; the Calabrese Fire Brigade Center. In recent years, he has frequent commitments abroad: at the invitation of some universities outside Italy, he exhibits at the House of Arts in Pécs, Hungary, in the Pet?fi Museum in Budapest, and later in the Museum of Fine Arts of Valletta in Malta. . In 2003 the French Institute of Florence dedicated a tribute to the artist by hosting one of his exhibitions. In 2005 he participated in the first review of the MAC, Museum of Contemporary Art of the Academy of Catanzaro. Since 2008 its exhibition activity has intensified: Naples, Milan, Innsbruck, Catanzaro, Bologna, up to (2011) at the Italian Pavilion of the Venice Biennale. In 2011, the Rocco Guglielmo foundation and the municipality of Catanzaro dedicated a large exhibition to him in the monumental complex of San Giovanni. For about ten years, the landscape has been the privileged subject of his works, exhibited in various Italian galleries. In October 2017 he was invited by the most important Italian magazine Panorama, to exhibit in the Milanese leg of the "Panorama d’Italia" tour, with a personal exhibition dedicated to Milan, set up at Palazzo Durini. In preparation is an exhibition in China with works that have as their subject the recent transformation of some world megalopolises. Until 2021 he was Professor of Decoration at the "Brera" Academy of Fine Arts in Milan.